The best players in the world spend less time looking at the ball, and more time searching for space, team-mates and opposition players. This helps them make better decisions; just consider what Xavi might be looking for in the picture above.

Arsene Wenger has been quoted saying: “The problem in football is that you learn how to play [the wrong] way round first execution, then decision making and perception last.” By adhering to this paradigm of devaluing perceptual processes we will never develop space artists like Lionel Messi, Bernardo Silva or Iniesta. Instead our players will learn to play with no understanding of space or how to play in relation to team-mates.

A shift of paradigm where we place perceptual processes like scanning behaviours and the collection of information higher is needed. Once this is the starting point of player development, they will naturally learn to understand tactical and technical behaviours through repetition in play and practice. It seems Wenger would approve; these abilities are characteristics of the best players in the world, and often also of the players who succeed at climbing the ranks of top academies.

This was the rationale for developing the Youth Curriculum.

By playing football you will learn to behave in a manner that is beneficial in the game. But with little focus on any single element of the game, therefore coaches tend to develop practices which recreates specific moments (or movements) with a higher frequency to ensure repetition. Players learn through repetition; unfortunately, due to the games complexity and intensity this cannot be trained efficiently by isolating each technical moment. Each situation and action require a different technique; therefore, practicing an ideal technique to perfection makes no sense, as technique must be seen as functional. One of the reasons coaches always want to do more is that they feel it is necessary in order to teach all moments and techniques of the game. Training more is not a good solution either, as quality must take priority over volume. Otherwise players will not learn to play at a higher level, where play is faster due to limited space/time.

With an old paradigm where technique is the starting point coaches will design activities which encourage bad behaviours and habits. Just consider:

In unopposed passing practices the player knows where the ball is coming from and where the next pass goes, and that there are no defenders in the way – they therefore do not need to scan. Compare this with the scanning behaviours of the best players in the world; here shown by Frank Lampard:

If training teaches these unwanted behaviours, we are doing our players a disfavour. And might actually be developing them to be worse at playing football. As these tactical behaviours are key to guide decision making and thus which action players choose to execute. Therefore, coaches must make players aware of the importance of scanning, and how to execute it efficiently.

The mission of every youth academy is to develop individuals who can take the next step and strengthen the clubs 1st team or are sold elsewhere for good money. In this perspective any investment into academies must be seen in the context of the reward of potentially helping more youths take this step.

A characteristic of players who show good spatial awareness and perceptual control is that they always seem to have more space and time than their peers. As football is played at a higher level this becomes increasingly challenging as space/time is reduced by better opponents; thus, this ability becomes more valuable. Any youth player who have played an age or two up or had their first training with the 1st team will point to quicker tempo as the main difference. At both arenas they are expected to do the same things, passing, shooting, dribbling etc; however, at a higher level they have to do this with less space/time.

Players with better scanning behaviours will be more capable of adapting to this higher tempo. In particular, scanning while the ball is travelling towards you is shown to correlate with successful forwards passes and be the most significant in terms of retaining possession (Phatak, 2018). This is called Transition Scanning. In these moments the players collect the most recent information from their surroundings which makes them more capable of making better decisions.

In 2013 Jordet et al. conducted a study on Premier League players scanning habits and found that the frequency of scans in a short period before receiving the ball directly correlated with more successful forward passing. This is not surprising when considering the fact it is easier to see better solutions when looking more frequent and with more quality; however, it is disappointing how little this ability is prioritized in youth football.

There is a premium on players who can play forwards without losing the ball frequently. These players are rare, yet we know one of the ingredients lies in scanning habits and perceptual behaviours. Once we know this to be true there is no excuse to deliver sessions where players are meant to only look at the ball. Further studies have revealed crucial information about when and how to scan, it is not sufficient to just look away from the ball. Players must learn to look near and far, and still make sure to watch the ball at the right time.

Players should look at the ball when the next action is unpredictable; when a player has the ball at their feet. When the player has took a big touch or played a pass the players should scan to “refresh their mental image” and collect new information from their surroundings.

As a coach this can sound intimidating to teach, as there are many concepts to remember and there are few universal principles. You could probably try to teach these habits to one player at the time during training, but at the cost of giving focus to everyone else.

Something which can help players adapt more efficient behaviours and help coaches understand the complexity of these processes are individual principles like these, read more about this concept here: See - Positioning - Body Shape 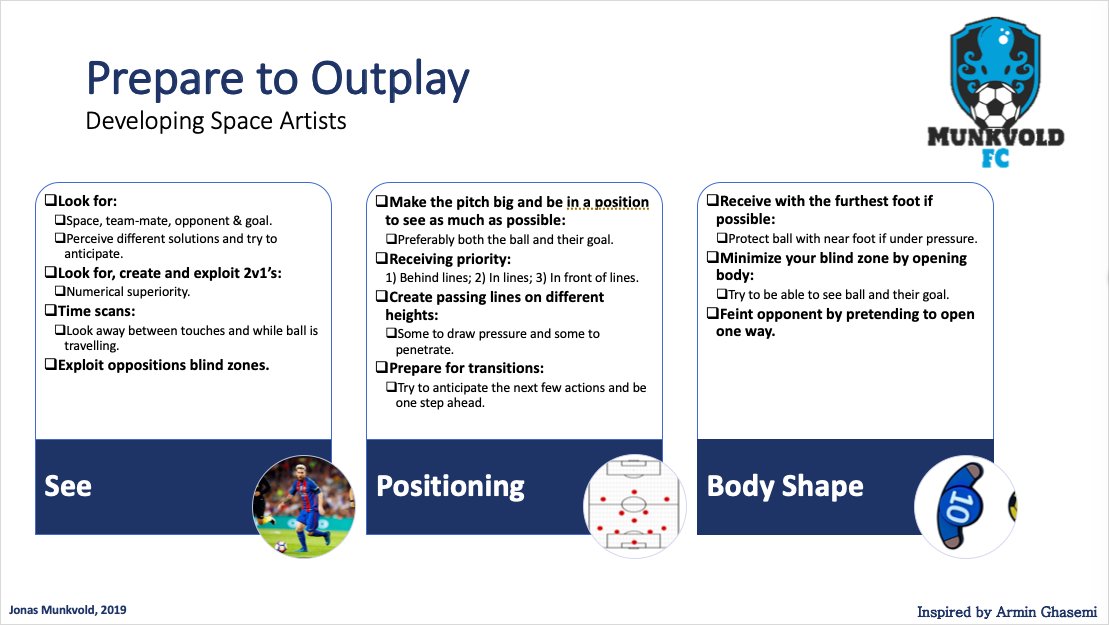 Once you start the game, you chose a position (then a difficulty level). This allows all learning to be specific to a position, which makes sense seeing as the centre mid sees the game from a very different angle than the fullback or centre back. Aksum (2016) has researched search behaviour in different playing positions in youth football, here you can see the profiles of CB, FB, CM, Winger and Striker:

The figure below shows frequency of scans from a study on Ajax’ famous academy (Aksum, 2016).